This report is very similar to what we were seeing in DeKalb, before the contracts were finally cancelled. Now we've figure out even more about why they were going at certain schools and not others. The towers appear to dot the map, quite literally, right around the areas that are now slated for the November ballot where new cities could be formed.

The cell tower fight was only the beginning. savetuckerfromlakesidecity.blogspot.com.
Posted by Get the Cell Out - ATL No comments: 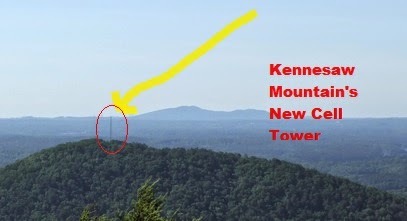 KENNESAW, Ga. – A new communications tower atop Kennesaw Mountain is more obtrusive than expected and is drawing criticism.

The 112-foot tower was erected in early May and is topped by radio equipment used by a variety of local public safety agencies, local hospitals, the National Park Service and utilities.

But it looks little different than a typical cell-phone tower. And though park officials promised it would be less visible than the four antennas it replaced, it turned out to be more visible.

The new tower rises an estimated 20 feet or so higher than the surrounding foliage near the top of the mountain and, to make matters worse, is on the side of the crest that faces nearby Marietta and Atlanta. Though the old towers could be seen from the base of the mountain by those with a practiced eye, the new tower is clearly visible from downtown Marietta several miles away.

That prompted grousing by local friends of the park and at least one sarcastic letter to the editor of the Marietta Daily Journal.


"I would like to compliment Kennesaw Mountain National Battlefield Park officials for permitting the recent construction of the historically accurate cell phone tower atop Kennesaw Mountain," wrote reader Rick Schick of Marietta. "Now, as visitors stand on top of Kennesaw Mountain, not only the cannons but the cell tower can serve as a reminder of how the war was fought. Our children will be able to picture in their minds the Civil War soldiers making critical battlefield decisions and communicating with their loved ones back home on their cell phones. …

"Lest we ever forget, it is only through the liberal use of asphalt, concrete and steel that true historic preservation can be achieved."


To read the full story, click here.
Posted by Get the Cell Out - ATL No comments:

Atlanta Public Schools Teachers Taken Away in Handcuffs for Cheating

Highlights of the April 1, 2015 verdicts in the Atlanta Public Schools cheating scandal:

CNN also has in-depth coverage here:  http://www.cnn.com/2015/04/01/us/atlanta-schools-cheating-scandal/
Posted by Get the Cell Out - ATL No comments:

When DeKalb County School Board members approved 30 year lease agreements that have finally
been withdrawn after years of protest and a court case that supported the county's right to uphold its zoning laws, Get the Cell Out was formed to spread the word about what was going on.  One of our complaints to the  now-removed by the Governor board at the time was that technology is changing so quickly that there is no way anyone can predict whether or not cell towers will be allowed, needed or even legal 30 years from now.   Without an "out" clause to protect the taxpayers' investment, what would happen if, let's just say for example, something else came along that was faster and more reliable than wireless? 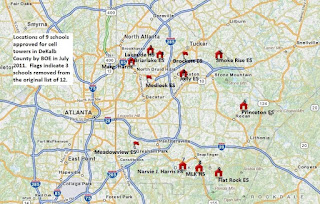 They had no answer, of course, but it has been only four years, not thirty, and guess what?  Those cell towers are no longer seen as money makers and instead could be losing ground even quicker than we predicted.  Google Fiber announced its plans to connect several areas as test markets and Sandy Springs, Decatur and Avondale Estes were selected.  If all goes well, they are predicting a full scale launch in more cities across the US.     As more events like this one take place across the county, we could easily see ourselves evolving to a society that is  a lot less dependent on cell towers and a lot happier and healthier for it, too!


The announcement that Google Fiber will be moving into the Atlanta market is already creating change for local consumers.

Well, there may be many benefits, but here are just a few:

1.)  Not as easy for hackers to intercept a signal

4.)  Does not emit RF radiation

5.)  Does  not ask for you to give up school grounds to install its equipment.

6.)  Not listed on anything published by the CDC in terms of possible Carcinogens.

7.)  Does not lower property values

8.)  Does not  take advantage of children by seeking space on their playgrounds.

While we still have a lot to learn about how these products work, we are pleased that there are alternatives being brought to market that will challenge wireless for space in the conversation about what's safe and effective and allowed by local zoning.