Federal scientists released partial findings Friday from a $25-million animal study that tested the possibility of links between cancer and chronic exposure to the type of radiation emitted from cell phones and wireless devices. The findings, which chronicle an unprecedented number of rodents subjected to a lifetime of electromagnetic radiation starting in utero, present some of the strongest evidence to date that such exposure is associated with the formation of rare cancers in at least two cell types in the brains and hearts of rats. The results, which were posted on a prepublication Web site run by Cold Spring Harbor Laboratory, are poised to reignite controversy about how such everyday exposure might affect human health.

Researchers at the National Toxicology Program (NTP), a federal interagency group under the National Institutes of Health, led the study. They chronically exposed rodents to carefully calibrated radio-frequency (RF) radiation levels designed to roughly emulate what humans with heavy cell phone use or exposure could theoretically experience in their daily lives. The animals were placed in specially built chambers that dosed their whole bodies with varying amounts and types of this radiation for approximately nine hours per day throughout their two-year life spans. “This is by far—far and away—the most carefully done cell phone bioassay, a biological assessment. This is a classic study that is done for trying to understand cancers in humans,” says Christopher Portier, a retired head of the NTP who helped launch the study and still sometimes works for the federal government as a consultant scientist. “There will have to be a lot of work after this to assess if it causes problems in humans, but the fact that you can do it in rats will be a big issue. It actually has me concerned, and I’m an expert.”

More than 90 percent of American adults use cell phones. Relatively little is known about their safety, however, because current exposure guidelines are based largely on knowledge about acute injury from thermal effects, not long-term, low-level exposure. The International Agency for Research on Cancer in 2011 classified RF radiation as a possible human carcinogen. But data from human studies has been “inconsistent,” the NTP has said on its website. Such studies are also hampered by the realities of testing in humans, such as recall bias—meaning cancer patients have to try to remember their cell phone use from years before, and how they held their handsets. Those data gaps prompted the NTP to engage in planning these new animal studies back in 2009.

The researchers found that as the thousands of rats in the new study were exposed to greater intensities of RF radiation, more of them developed rare forms of brain and heart cancer that could not be easily explained away, exhibiting a direct dose–response relationship. Overall, the incidence of these rare tumors was still relatively low, which would be expected with rare tumors in general, but the incidence grew with greater levels of exposure to the radiation. Some of the rats had glioma—a tumor of the glial cells in the brain—or schwannoma of the heart. Furthering concern about the findings: In prior epidemiological studies of humans and cell phone exposure, both types of tumors have also cropped up as associations.

In contrast, none of the control rats—those not exposed to the radiation—developed such tumors. But complicating matters was the fact that the findings were mixed across sexes: More such lesions were found in male rats than in female rats. The tumors in the male rats “are considered likely the result of whole-body exposure” to this radiation, the study authors wrote. And the data suggests the relationship was strongest between the RF exposure and the lesions in the heart, rather than the brain: Cardiac schwannomas were observed in male rats at all exposed groups, the authors note. But no “biologically significant effects were observed in the brain or heart of female rats regardless of modulation.” Based on these findings, Portier said that this is not just an associated finding—but that the relationship between radiation exposure and cancer is clear. “I would call it a causative study, absolutely. They controlled everything in the study. It’s [the cancer] because of the exposure.”

Read the full article here.
Posted by Get the Cell Out - ATL No comments:

ROCKVILLE — A few parents at a Montgomery County Public Schools Board of Education meeting said they worried that wireless computers and devices with wireless Internet was gradually impeding the health of students.

Read some excerpts from the article.. "David Carpenter is a former county resident and a general physician who served on committees with scientists who performed research about the effects of radio frequency radiation.

He wrote a letter to members of MCPS management in November encouraging them not to have the school system connected to the Internet wirelessly. Carpenter also is the director of the Institute for Health and the Environment at the University at Albany.

MCPS spokesperson Derek Turner said MCPS follows guidelines set by the Federal Communications Commission. One of the repeated concerns of parents who testified at the meeting and said the standard was 20 years old.  Turner said the guideline had been updated in 2013. "

So were the guidelines updated in 2013 or 20 years ago? That is the question.  Read more at http://www.thesentinel.com/mont/newsx/local/item/3154-parents-worry-wi-fi-could-harm-students
Posted by Get the Cell Out - ATL No comments:

Words of the Wise: Citizens Speak Out Against Cell Towers at Schools.

For a historical look back at the fight to keep cell towers off school grounds in DeKalb County, you can view some of the school board meetings that saw parents and community members speak to their concerns and their plans to take the fight as far as they needed to in order to get the school board to reverse its decision.

Starting with this meeting, February 13, 2012: http://view.earthchannel.com/PlayerController.aspx?PGD=dekalbschga&eID=58

Start at the 40:40 mark for speaker Rudy Evanson (above) and Richard Marion (below). 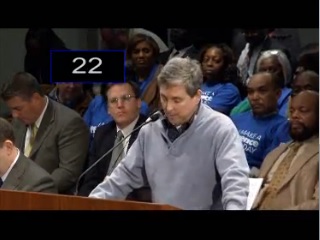