GTCO-ATL:  When we brought up the many reasons why we did not want to place cell phone towers at our public schools in DeKalb County, most of the politicians and school administrators we spoke to simply dismissed our concerns.  Reading things like this should serve as a reminder to everyone who spoke out against the cell towers that were planned in Dekalb County, GA.  When it is your neighborhood or you child who could be placed in harm's way, the "what if" scenarios suddenly do not sound so far fectched.

"We did the right thing," says Paul Miller, co-founder.

Newport News, Va. – A cell phone tower in the 5800 block of Marshall Avenue caught on fire Monday around noon, according to the Newport News Fire Department. 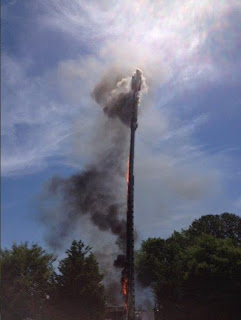 Fire Chief Stephen Pincus says a company was working on the tower doing some welding when some insulation to the wires caught on fire.

Crews arrived to find a massive amount of fire at the base of the tower and wires burning along the full length of the tower.

With heat index values already over 100 degrees in Newport News, fire crews had some difficulty putting the fire out because the heat was so taxing. It took approximately 25 minutes to get the fire under control.

The structural integrity of the tower was compromised due to the heat of the fire and the tower is now leaning. The damage is extensive and the tower has been disabled...

...The tower is located on property in between Heritage High School and Achievable Dreams Middle & High School. Students were not in school but teachers were at both locations.
Posted by Get the Cell Out - ATL No comments: